Please join us for our first concert of the season –– an evening with the accomplished young artists of The Bard College Conservatory of Music's Raman String Quintet.
Reserve at rhoveninc@gmail.com 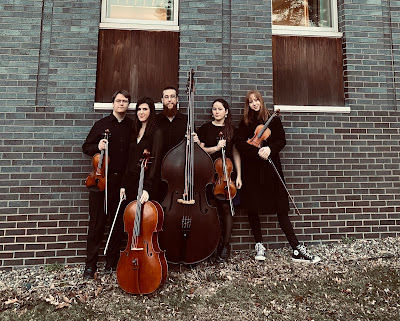 
Massachusetts violist Mercer Greenwald is in her third year at Bard, studying viola with Marka Gustavsson. She has performed with the Empire State Youth Orchestra and the Boston Symphony Youth Orchestra while in high school. Mercer gave a solo performance with the Sage City Symphony, and won the Bennington Choral Society Scholarship as well as the Kenneth Cotrell Competition. She spent a year in Vienna studying with Georg Hamann at the Johann Sebastian Bach Musikschule. During this time she played with the Young Masters Orchestra of Vienna and the Niederösterreiches Jugendsymphonieorchester.


Shaunessy Renker is majoring in violin performance and German studies at Bard College and the Conservatory of Music where she studies under Daniel Phillips. She began playing the violin at seven years old and studied under Ronald Neal, former student of Ivan Galamian. At age 11, she made her solo debut with the Dallas Chamber Orchestra. Shaunessy has attended the Music in the Mountains summer program in Durango, Colorado, the International Music Conservatory in Dallas, and the acclaimed Meadowmount School of Music during which she studied with Ann Setzer. She has been a top prize winner at the Dallas Symphonic Festival, Texas MTNA Competition, International Music Conservatory Young Artist Competition, and Collin County Young Artist Competition. Shaunessy was the concertmaster of the Greater North Texas Youth Orchestra and worked in the mentorship program at the Odysseus North Texas Orchestra. In 2018, she was awarded The Lea Courington Music Scholarship.


Violinist Eliot Roske is in his fifth and final year at Bard College and the Conservatory of Music where he is completing a degree in violin performance and a degree in mathematics.  At age three Eliot began studying violin using the Suzuki Method, with Nicolette Solomon. He attended Meadowmount Summer Academy and went on to attend the Castleman Quartet Program, where he has spent the past four summers. At Bard, Eliot studies violin with Weigang Li. He was concertmaster of the Bard College Community Orchestra in the 2017-18 season. Eliot hopes to pursue a master of music degree with Charles Castleman at the Frost School of Music in Miami.


Nathaniel Savage is in his third year at the Bard Conservatory of Music, pursuing a BM degree in double bass performance, and a BA degree in philosophy. Nathaniel currently studies with Leigh Mesh of the Metropolitan Opera Orchestra. As a soloist, Nathaniel has earned an honorable mention in the American String Teacher’s Association’s 2016 national competition, and was a finalist in the 2016 Jacqueline Avent Concerto Competition at the Sewannee Music Festival. He performed for three years with the Boston Philharmonic Youth Orchestra, and toured with them to the Czech Republic, Germany, and Switzerland. Nathaniel has been section leader of the Bard Conservatory and Community Orchestras, and served as a performer and organizer for the Bard Conservatory’s student-led performance of Stravinsky’s A Soldier’s Tale.


Charlotte Ullman is in her second year of the Advanced Performance Studies program at the Bard College Conservatory, studying under cellist Peter Wiley. Charlotte holds a BA degree in cello performance from Carnegie Mellon University, where she studied with Anne Martindale Williams, and a MA degree in cello performance from Southern Methodist University, where she studied with Andrés Díaz. Other influential teachers include Clive Greensmith, David Premo, Christopher Adkins, and Nicholas Anderson. She has appeared twice as an orchestral fellow at the Texas Music Festival, and performed at the Wintergreen Summer Music Festival and the Meadowmount School of Music.